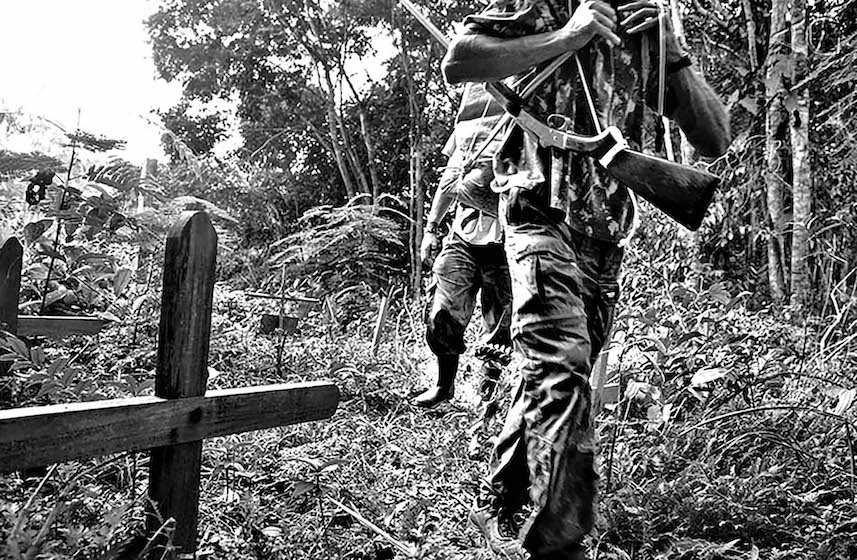 Two researchers, whose scientific work permits allowed them to carry weapons, were passing a small cemetery in a riverside community, on the edge of the Amazon. Photo: Adriano Gambarini

Adriano Gambarini
Dear readers: Look at this photo and tell yourself what immediately comes to mind. Well, not everything is what it seems…
Since I know myself as a photographer, and even before that, when I was a mere admirer of the eyes of others and their frugal revelations in the form of photography, I try to understand the reason for the distorted information that some people attribute to the captions of their own work. Lying to the reader is, above all, lying to yourself. After all, that photographer, or aspiring, knows what happened, was there in the scene they shot, where it happened and under what circumstances. So why attribute a story that didn’t exist? And now, in this digital world where people want to achieve perfection at all costs, photography has become a mere instrument to play at being divine; and so the birds start to have extravagant colors, the horizons become psychedelic images and the insects become so colorful that even they wouldn’t recognize themselves in a mirror. Gone are the days of real or pastel colors.
Interference is institutionalized, and subtitles are even more commonplace.
Perhaps society has this inherent need to observe a photograph; that of quantifying, mystifying, deifying the image and, because of this, who produced it.
Susan Sontag wrote: “All photos wait their turn to be explained, or misrepresented, by their captions.”
Without questioning the personal taste of distorting the very image that they recorded, every photographer has a great responsibility, as a human being, to attribute to their work the exact information about the scene they documented. There may even be a polish to the story, but not a distortion. After all, polishing is giving shine; to distort is to change.
If there is the premise that photography immortalizes a moment, may each one be noble enough to immortalize a truth.