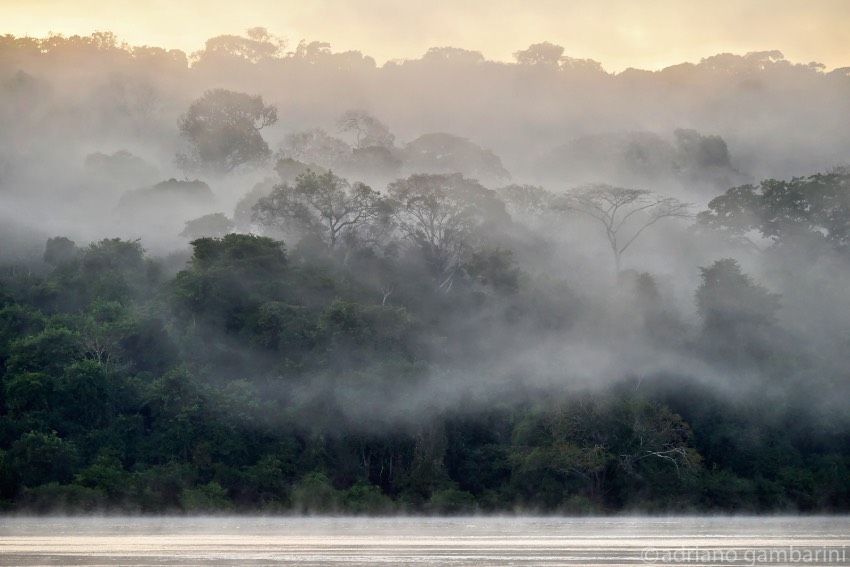 I haven’t started today traveling through the Amazon. It’s been almost three decades of travel through all the States of the Legal Amazon. And over the last fifteen years I’ve documented an average of three major expeditions a year, where the logistics involved hours of single-engine airplanes, helicopters, flying boats, small canoes, long walks, makeshift camps and lots, lots of patience. Some trips mark more than others, physically or psychologically.

There, there is no time for maybe. Strong place, where everything is exponentially extreme. And even for those who are used to it, the intensity of the routine is sapping energy, creating wounds, dampening the mood. I stopped counting the time I was immersed in the forest, holed up in camps, bathing in dark streams, seeing the sun only through the small clearings of falling trees. With wet feet and clothes on, which could not dry. Facing hordes of bees and so many insects, which lick your sweat and your eyes, sting you if molested. Hundreds of them, without respite. Only the dead of night brings their absence. I saw caboclos fall from fever, in the coming and going of malaria, and so many others who returned from the trails, silently took their ‘ranch’ of beans, jerked beef and flour, and looked for some corner to feed the punished body. Conversations diminish as time passes; sign of inertia, of physical and mental fatigue. They say the forest is claustrophobic. And it is. The light is low, the humidity is high, the height of the trees is extreme. The feeling that we are being watched is constant.

At the same time, it is fantastically mysterious, free from concepts of right or wrong, good or evil. And only those who can see the beauty hidden beyond their centuries-old trunks realize that the monsters are in the imagination. Everything follows its natural rhythm, and for that, it is necessary to understand this movement.

At the end of the day, the curupira is a friend, and he gives his advice: “Don’t be distracted, don’t act unsafely, don’t hesitate. Be prudent”. Because the surucucu is there, camouflaged, and only a trained eye can see it. The tatuquira mosquitoes are also there; a subtle sting and maybe you’ll realize that it’s landed on your skin, and all you can do is hope that that little insect doesn’t transmit leishmaniasis. “Leshi” for intimates. The invisible forms of life capable of making us sick may be there, in the waters of the streams.

But there is also the graceful flight of the macaws, the shaking of the branches by the rowdy groups of spider monkeys, the shy songs of the birds that cannot be seen, but are there, camouflaged by the natural order of survival. The imposing cry of howler monkeys. The curious irara jumping on the logs is also there, and the delicious sensation of realizing that that agitated animal may never have seen a man. The trail of cats, big and small, the light lizards. The graceful photogenicity of the multicolored frogs is also there, among the dry leaves of the great forest’s fertile soil.

The memorable sunrise over the stone slab, a remnant of a savannah that once dominated the Amazon — is also there.

There is the majesty of the chestnut trees, which allows their hard urchins to fall and reminds us of the unbridled desire to eat their seeds. Our machete blows expose the delicious chestnuts, whose shell we open with our teeth (and may my dentist brother not condemn me!), to gnaw fervently like the best of delicacies.

It is there, floating like the mist of a cold dawn, the wisdom of the native peoples who know every corner of that sacred forest like their own soul. Indigenous people who live there like their ancestors, or who had to adapt, understand the dynamics of whites to make themselves visible in a world tragically constructed from a binary order: good or bad, colonized or colonizer. Before the forest, we are just a single species. Let’s adapt, or the order of evolution decides. There is all the harmony of those who believe they are in this world for a greater good.

But there is also the greed of those who don’t look to the future, and oblivious to any common sense, insist on laying down that sea of ​​trees. Burn them to the last leaf. After all, their narrow ignorance makes them believe that extracting natural goods gives them more profit than managing them. But they ignore that there is no future. And the uncertain future will be for their heirs.

Blessed are those who, however, are there with their ideological gestures of those who perceive the value of life, of plants and animals, of the forest people; secular residents or passing visitors, but who know the strength of those waters, the importance and complicity of the shadows defining shapes, in synergy with the rays of sun that illuminate their paths.

Blessed are those who have a story to tell. And earth traces to follow.