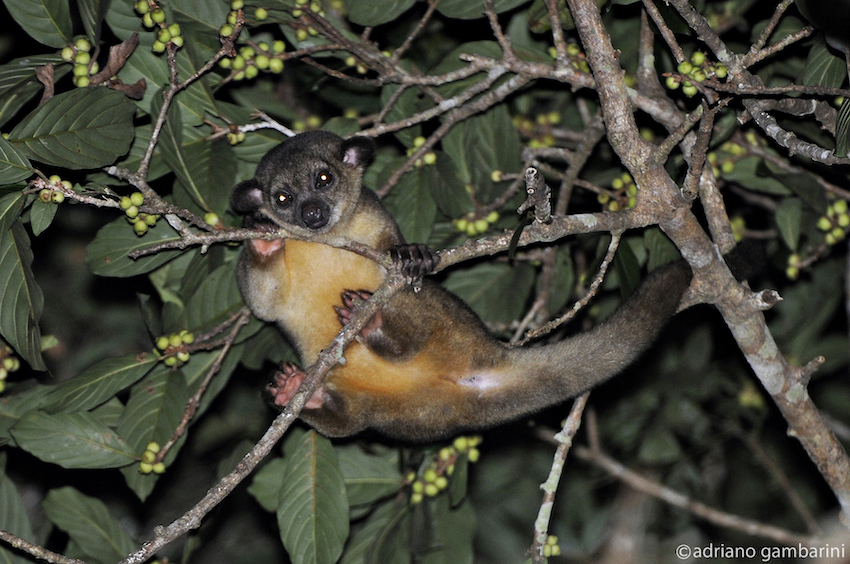 A Jupará in the Arapiuns River region, Pará state, Brazil

Adriano Gambarini
The conversation always starts the same way.
— Are there night monkeys here?
— There’s too much! The other day, about four appeared there, beyond that bacaba palm.
If I give leash, the subject grows.
— Day before was hunting, and some gogó-de-sole came in the fire, if I can’t handle two, they’d jump on my neck!
And in a conversation that transits the surreal, I try to follow the prose and understand those words.
— Are we going to look for some today for me to photograph?
— Come on!
In a simplified “translation”, I asked a resident of the Amazon if there was Jupará there in the region. Jupará is a species of arboreal carnivore, with nocturnal habits. But the riverside people call it gogó-de-sola, or night monkey, because it really looks like a small primate with big eyes, easily confused with the real night monkey. I’ve lost count of the times I’ve had a conversation like this with these forest people, and the answer is always the same. There are many and they always attack hunters (an untruth, obviously.) But I never found it, even after years of making night transects*. I confess that the failure to not find is in no way frustrating. Because in the search there is a meeting of worlds. I love the way they describe the animal, its fanciful aggression, the attacks on “my cousin” at the foot of the fire.
The good thing about it all is that in this search I have already found other nocturnal inhabitants. Night monkey, hedgehog, various species of urutau**, bush deer, parrot snake, marsupials, various owls, tiny tree frogs, rodents that defy science – is this a new species? Not to mention countless insects.
And smells; I must say, anyone who once knew the scent of a jaguar, never forgets it. But to feel that smell when you’re alone in the woods, in a twilight where you can’t see anything… it’s not good, I confess.
As for the Jupará? I finally found it after years of searching. On one of my trips to the Tapajós River region, I spent a lot of time working in riverside communities on the Arapiuns River. Ademar, the leader of a community, was with me all day, stalking a harpy eagle’s nest and it was night when we returned tired. Ademar bringing two tortoises that would serve as a meal for the family. That’s when we heard a subtle chirp over our heads. I was curious about that vocalization that I had never heard, but I knew it wasn’t a night monkey. I lit up and there were two eyes hidden in the foliage! Finally, I was facing a legend! Despite being curious, the animal is too shy, and its appearance does not last a minute. During this time I have to light up, prepare the flash, hold the camera (which weighs about 10 kg , or 22 pounds, with the lens, flash and battery) at 90 degrees upwards, find the animal in the branches, attract its curiosity, focus the animal at about 20 meters (66 feet) high…
I couldn’t manage the equipment and the flashlight, and I asked Ademar to help me. He then put the two tortoises upside down on the ground and lit it for me. And in a space of time that didn’t last 5 minutes, here’s the result: Three great photos, plus 2 dark and blurry ones. Ademar lost a tortoise, I gained many ticks and the great pleasure of seeing, and now sharing, an animal that is perhaps as fanciful as the stories that are lost in the corners of the forest.

*Travels in which occurrences of the objects of study are counted and recorded.
**Harpy eagle