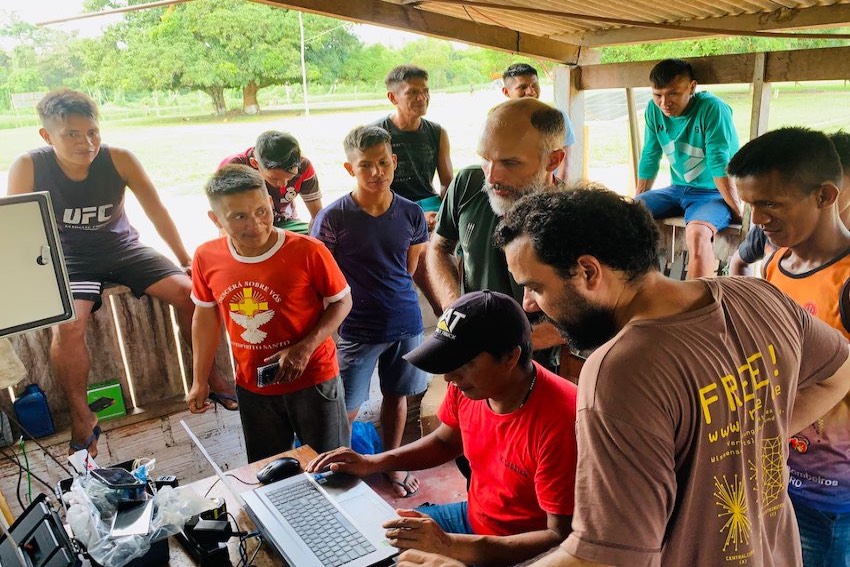 Indigenous people from the Oro Nao nation, in the Amazon near Bolivia, test the system. Photo: Luciene Kaxinawá

Indigenous people Uru Eu Wau Wau and Oro Nao are the first in Brazil to test the digital telecommunication system on shortwave radio. According to the creators, this low-cost system will assist in territorial monitoring, providing faster and more secure communication.

The system is powered by solar panels and does not require electricity, fiber optic cable or satellite signal. Other villages only have a radio-frequency system, which works only as a telephone, to send voice messages. This new system, on the other hand, offers all internet’s functionalities, such as sending photos, videos and spreadsheets.

Indigenous people are expected to use it mainly to denounce invasions, using images, and also to warn about sick people in the villages.

Because the technology is new in Brazil, Brazilian and foreign experts were in Rondônia to train the indigenous people and set up the system in two communities. It was three days of intense work and learning. According to Kaimbu Juma Uru Eu Wau Wau, this moment is of great importance, especially for the indigenous youth: “We will take a great learning experience so that we can teach other people, strengthen this within our communities to empower this youth. It will have a positive impact on us, especially during electricity blackouts, as the system works through solar panels”.

The initiative is part of the project Strengthening the Protection of Indigenous Territories through the Use of Technologies, carried out by Kanindé – Ethno-environmental Defense Association, with support from WWF Brazil and the Gordon and Betty Moore Foundation. The system was set up in partnership with Rhizomatica (Association for Progressive Communications) and Usinazul, an engineering and consulting company in sustainable energy and environmental services.

“This system was all designed and developed for the Amazon, so being able to do this first setting up here is indeed an accomplishment for us,” said Rafael Diniz, creator of the Hermes system. He is Brazilian, but has lived in Russia for over two years, and came to Brazil to closely monitor the Hermes set up. “The package includes the entire system, with a computer inside the radio set, which routes the messages and also the web interface that is accessed by the cell phone. This system allows access to all data via wi-fi. You can send and receive messages, photos and videos, making it easier to report threats within the territories”, says the creator of the system.

According to geologist Damarys Elage, in addition to Hermes, communities count on the Kanindé Monitoring and Deforestation System, which generates daily alerts through satellites, has drone images taken from the field and the Smart app. Together, these systems should facilitate sharing with  the authorities community data on deforestation and encroachments on these territories.

Technical coordinator Israel do Vale says this project has been studied since 2019 together with WWF Brazil. The idea came up during a training session for indigenous people on the use of technologies for territorial monitoring. “Hermes facilitates data communication from the village to the central base in Porto Velho, and in this way we are able to speed up the denouncement process”, explains the coordinator.

Felipe Spina, who is responsible for conservation technologies at WWF Brazil, says Hermes is the first approved digital radio in Brazil: “The project is a continuation of the actions that we have been doing since 2019. We started by supporting with the fire emergencies, and then we got funding from the Moore Foundation to work on the territorial protection component. And now we have the Bengo project, which besides this territorial protection agenda adds other very important issues such as sociobiodiversity and mining, among others”.

One of the communities that received this system was the Oro Nao people, who live in the border region between Brazil and Bolivia, in the interior of the state of Rondônia. About 400 indigenous people live in this community. For Benjamim Oro Nao, president of the Santo André Indigenous Association, this technology should help the community: “We are prepared and able to use these technologies and monitor our land. We really want to defend our area” .

Chief João Marcos Oro Nao also approved the the new system set up in the indigenous territory: “We are really happy, because we need this in the village, this support, especially in emergency situations.”

The system is still in testing phase within these communities in Rondônia. 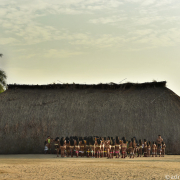