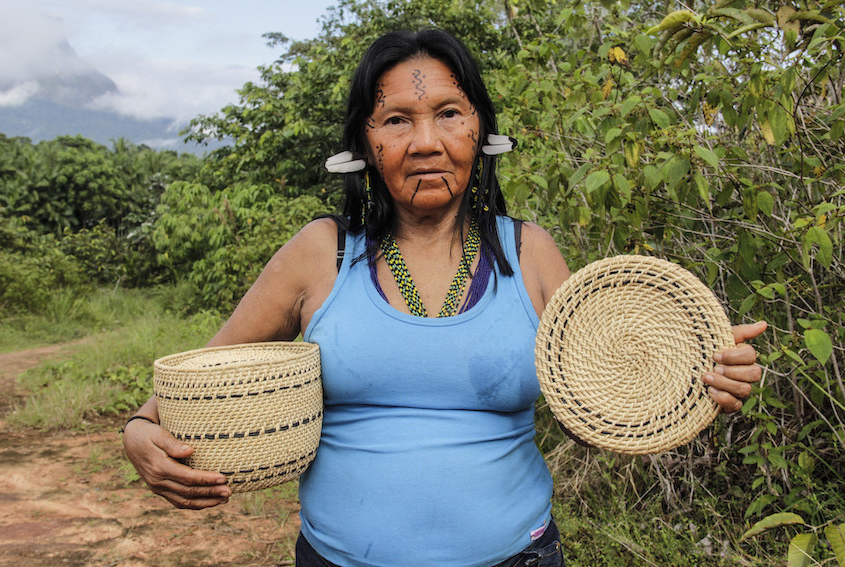 Indigenous knowledge is often lost in the time of their ancestors. In other examples, they are recent discoveries. This is the case of the përɨsɨ fungus, which Yanomami women found in the forest in the Maturacá region, at the foot of Pico da Neblina, near the border between Brazil and Venezuela. This black, shiny and resistant thread, which can get as long as one meter, gave a special touch to baskets woven from vines and sometimes painted with annatto, the natural red dye from the Amazon.

But precisely because of its shine and toughness, it didn’t seem natural. It looked more like plastic added to handicrafts, and for this reason it was undervalued at city fairs, where indigenous women sometimes exchanged baskets for some food.
The fungus even fooled scientist Noemia Kazue Ishikawa, who is an ethnomicologist, in other words, a specialist in the use of fungi and their impact on culture. “I myself thought it was plastic”, she admitted to journalist Roberto Almeida, from the Instituto Socioambiental (ISA).

The fungus was not among the 140,000 cataloged by science, despite being mentioned in 2009 in the book “Urihi A: The Yanomami Earth-Forest”, by French anthropologist Bruce Albert and British ethnobotanist William Milliken, published by ISA. Until, in 2017, two Yanomami women, Floriza da Cruz Pinto Yanomami and Maria de Jesus Lima Yanomami, found a “relative” of theirs in the Adolpho Ducke Forest Reserve, on the outskirts of Manaus (AM), where the National Institute for Research in the Amazon (Inpa) carries out studies of the forest.

The Association of Yanomami Kumirãyõma Women sent samples of the fungus to Dr. Noemia, accompanied by a letter, which read: “By means of this letter, we request your collaboration in the identification of the samples collected during the research. We also request that samples be returned to our association once identification is complete.”

Laboratory analyzes led to the identification of the fungus as belonging to the genus Marasmius. It was named Marasmius yanomami, in honor of the people who discovered it. “That was how the two universes, the Yanomami and the academic world, were connected”, remarks Marina Vieira, a researcher at ISA, who facilitated contact between indigenous women and Inpa researchers.

In addition to contributing to science, the fact that the fungus has been identified as a noble product of nature has also brought benefits to Yanomami artisans. Now, it can no longer be confused with plastic, and its natural nobility is recognized by science.
The recognition was part of a process of valuing the baskets, triggered by the creation of the Yanomami Kumirãyõma Women’s Association. The Women’s Department of the Rio Negro Indigenous Organizations Federation  (Foirn) offered members a workshop to improve the finishing of baskets. Foirn has a store in São Gabriel da Cachoeira, called Wariró, which sells part of the production.

Experts estimate that there are 3.8 million species of fungus on our planet. How many of them are in the Amazon? How many are already used by forest peoples, and how many are waiting to be discovered, to become sources of wealth, beauty and self-esteem?