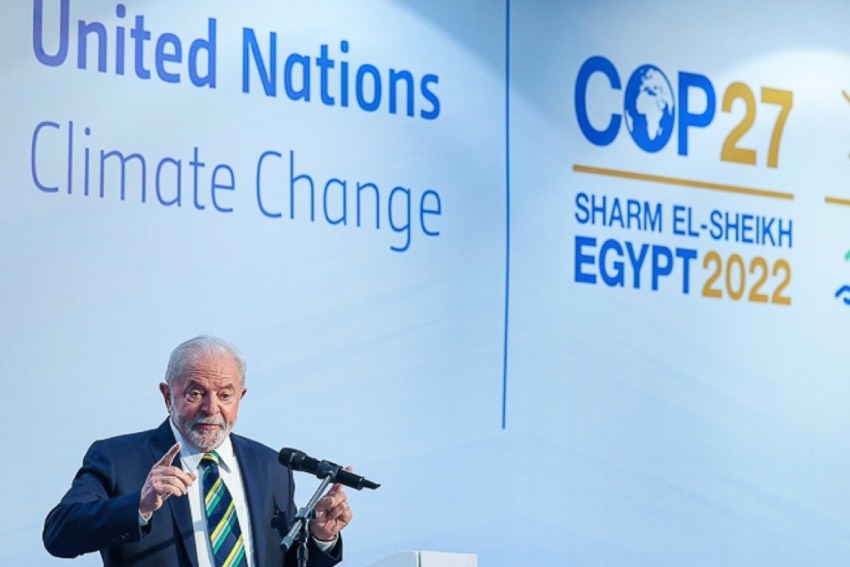 President-elect Lula da Silva reiterated at COP27 this Wednesday Brazil’s commitment to zero deforestation by 2030. “There is no climate security for the world without a protected Amazon,” acknowledged Lula, in the UN room at the conference at Sharm el Sheikh, Egypt. “We will spare no efforts to stop deforestation and the degradation of our biomes by 2030.”

“Brazil has already shown the world the way to defeat deforestation and global warming,” he said. “Between 2004 and 2012, we reduced the rate of deforestation in the Amazon by 83%, while the agricultural GDP grew by 75%.”

On the other hand, the president-elect demanded that rich countries fulfill the promise to mobilize US$ 100 billion a year to support developing countries in the energy transition, in eliminating deforestation and facing the climate change effects, such as floods, droughts and the raise in sea levels. “The agreements already finalized have to get off the ground,” he said. “For this, it is necessary to make resources available so that developing countries, especially the poorest, can face the consequences of a problem created largely by the richest countries, but which disproportionately affects the most vulnerable.”

At COP15, in Copenhagen, in 2009, it was agreed that rich countries would contribute US$ 100 billion a year starting in 2020. The pandemic came, and that money did not appear. Last year, it was US$ 83 billion. The biggest contributor was the European Union, with US$ 23 billion, an amount that it promises to allocate this year as well. According to the German organization Climate Clock, the United States’ contribution to climate change would be equivalent to US$32.3 billion. The country contributed, however, with US$ 7.6 billion in 2021.

Alongside the governor of Pará state, Hélder Barbalho, Lula proposed hosting COP30, in 2025, in a state in the Amazon. Brazil was scheduled to host the 2019 conference, but the government of Jair Bolsonaro showed no interest. So the host role went to Spain. Lula talked about the matter with the Spanish Minister of Ecological Transition, Theresa Ribera. Spain has already hosted COP25 in 2020 in Madrid.

Everything seemed to be going well, after all, the COP participants would be much more interested in going to the Amazon than to Spain. In addition, the Prime Minister of Spain, the socialist Pedro Sánchez, is a friend of Lula, received him in Madrid in November 2021 and declared support for his candidacy in the second round last October.

But an internal political problem arose: the governor of Andalucia, Juanma Moreno, asked Sánchez for his region to host the conference. Moreno is from the opposition Popular Party (PP). Ignoring his request would give the impression that Sánchez has set aside national interest to serve a foreign ruler rather than a domestic political rival. Let’s see what the Spanish Prime Minister’s decision will be.

Lula also met with representatives of the United States, China and the European Union for the Environment, John Kerry, Xie Zhen Hua and Frans Timmermans, respectively, and with the UN Secretary General, António Guterres. With or without COP30, “Brazil is back”, as Lula said.